I want to write about today, just so I won’t forget it. So I won’t forget, that as a parent, I really do have days where I not only know what I’m doing, but being a parent can feel easy and fun and absolutely wonderful.

Today was supposed to be a family day.  My husband will be working more during the next few months, so when we knew he wouldn’t be “on call” this weekend, we planned on doing a few simple but fun things away from home and just getting a chance to be outside for a change. (It’s been one helluva winter, no?)  But, as fate would have it, my husband got called out anyway.  So plans needed to change.

My boy had a t-ball practice at 9am, so off we went.  He typically likes to play, but you can  usually see a bit of feet-dragging going on during the practice.  This morning, though, he was in the zone.  He did everything that was asked of him.  When out in the field, he actually ran to every ball instead of waiting for it to come to him.  At batting practice, he worked on batting both sides (he’s right handed but typically bats left), and he ran the bases with enthusiasm.   It was a beauty to see.

Once we arrived home, he knew he needed to take a quick shower (he was several days overdue!), and this is where a bit of the feet dragging kicked in.   He stayed outside for a while, then when he came in he tried to watch tv. (I hid the remote control.) Once I told him that we would not go anywhere nor was he allowed to do anything until he showered, *then* he slowly made his way to the bathroom like it was a walk to the gallows.

We were finally on the road less than an hour later, both hungry and looking forward to a lunch of sushi and miso soup.  We ate at our favorite restaurant, Ichiban, had a fantastic meal with lots of toasting and saying “Cheers!” (his new favorite thing to do) and drank an entire pot of green tea between the two of us.  Everything was tasty and nothing major was spilled.  It was lovely.

The day continued with errands and ice cream and playing in the park.  We didn’t do anything extraordinary, but we were relaxed and the sun was shining and we were having fun by just being together.  There was no misbehaving, no yelling, and no pouting—from either one of us.

On our last stop, the grocery store, every single person we talked to—clerks, anyone who smiled at us, the people parked next to us—my son would say to them, “We had a GREAT day! An AWESOME day!”   It was the absolute sweetest thing.  Throughout the afternoon, Briar would say to me, “You’re the best, Mom,” and “You are just so, so beautiful.”   He was so incredibly happy.  *I* was so happy.   Yes, we did miss my husband and felt bad that he had to work such long hours today, and hopefully we’ll do something together tomorrow.  But for today?  My son and I had one of the happiest days of our lives…and we knew it.

I wish I could explain *why* we were so happy.  We didn’t go to Disneyworld.  We didn’t run a race.  We shopped for groceries and goofed off at a playground in the sunshine and ate at our favorite place and we did all of those things together.  I know it doesn’t seem like much, but it was truly the perfect day.  It was so perfect, that we both wanted to mark the occasion by taking a photo of ourselves before the day was through.

So neither one of us would ever forget it. 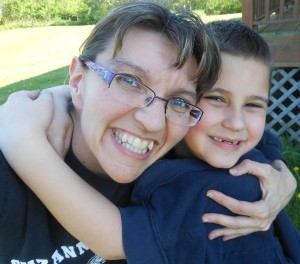 If I could give every single person in the world a gift, it would be to have a perfectly happy day, and realize how happy and wonderful it is *while* it’s happening.  It may in fact be one of the greatest experiences I’ve ever had.