I think it’s time I came clean. I’ve tried to be ok with this. I tried to assimilate. But damn it, the Borg can’t have me. So let me be clear…

I do. I hate them. They irritate me to no end.

First, # was not always called a hashtag. You do realize it’s the number symbol or the pound sign, right? And technically, # is not a hashtag. You need both the symbol and a word after it to be a hashtag.

So what would you call this creature? 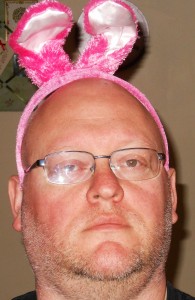 Apparently we can name things whatever the hell we want, so I’m calling him the Easter bunny, damn it.

Look, if you’re using Twitter, then I get it. Fine. Hashtags, as the world now calls them, have been used on Twitter for nearly 9 years now as a way to show groups, or to be used as a kind of unifying tool like #forthepeople or #imwithher.  Great. Fantastic.

But then hashtags started showing up EVERYWHERE. Not just other social media like Facebook, but in advertising, news reports, and my particular pet peeve–in conversations. Really?!? Why must you say, “hashtag idiot,” if you’re talking about someone and what to call them an idiot? JUST SAY “IDIOT!”  Or say “fucking idiot” if you want to add some real emphasis.

I realize people are trying to be clever in many of their hashtags or cutesy like #soinlove or #awesomesauce, and every blue moon a hashtag does make me chuckle. But mostly? Mostly they irritate me and give me an urge to hit people.

Admittedly,  many of my friends are hashtag happy. I still love them and think they’re amazing, but my urge to slap them has not waned.

I’m hoping that the hashtag fetish will dissipate in the next 10 years and I can find something else to irritate me. But until then, this is all I have to say, hashtag users.