I started 2014 with a visit to a neurosurgeon, who told me that with a more positive outlook on my life and my health, my back would get better.  And for a  while, things *were* better. I was able to run more off and on throughout the spring and summer. By fall, though, I asked my doc to send me back to physical therapy. Each night without fail, pain would shoot through my lower back, making it nearly impossible for me to walk from my son’s bedroom (after a fun-filled evening of reading) to my own room.  There were many nights that I lay in my bed and my boy would read me something from his room because I just couldn’t get back up again.  And after two months of PT, I once again have a better outlook on life, but not without some changes to my future.

My physical therapist, Chad, is a very good person, or so I believe. He came up with a walk/slow run plan for me that will eventually get me back in shape and back to running on a more consistent basis.  I liked that. But he also told me that any dream I had about running a marathon or even another half marathon, would never come to fruition.  Chad said, “If you’re running because you enjoy it and it makes you feel good and because you want to improve your physical and mental health, then good for you. Keep running. But….as for long distances….”

I have no idea what else he said because I started to talk over him. I didn’t want him to say the actual phrase “You cannot do this.”  He didn’t want to either.  So I said, “You know, I ran a half marathon last year and I’m so glad I did. But I’ve pretty much give up on my dreams on running a marathon.”  (I wish I could have seen my face, because *that* is the face of a liar.)  Chad nodded and said something else about running for my enjoyment and I shook his hand and got out of there. I held in my tears driving back to work then ate too much candy throughout the rest of the day.

But you know what? That was two weeks ago. The words have been said, the deed is done. I’ve started the walk/slow run program and it’s super hard. I’m really out of shape and I want to eat everything in sight and since I tend to do what I want, I gained 7 pounds since Thanksgiving.  (I know I said that in the last blog post, but I’m still in shock over it so I felt the need to say it again.) But now it’s officially 2015 and I have to just suck it up (especially when buttoning my pants) and do this walk/run program and stay diligent with my back exercises or I will always be in pain and miserable and terribly squishy.

Just yesterday I was feeling sorry for myself because I couldn’t complete the walk/run program for that day. Chad told me that if at any point during the run portion specifically, if I feel pain then I should stop running and start walking. So I did.

And I was pissed about it.

I was mad that I couldn’t run anywhere near the mileage I did a few  months ago. I was angry that I’d never be able to run the Bay of Fundy Marathon I set my eyes on back in 2013, hoping I’d make it there by 2018.  I felt like an imposter for being my friend’s virtual “coach” as she loses weight and trains for a marathon in the spring. I wallowed in my self-pity, whined a bit on FB, and ate a big spoonful of Cool Whip. (I know, I know, it’s nasty stuff. A bowl full of chemicals. But I friggin’ love it.) 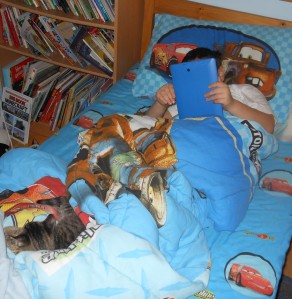 That’s our kitten, Bean, snuggled at my boy’s feet.

This morning after breakfast, I was in my bedroom trying to decide if I wanted to try and workout or just loaf around for a bit, when I heard my son run to the bathroom. He was sick and a little scared and needed me. After helping him get cleaned up, we proceeded to camp out in the living room, where we watched My Little Pony and attempted sips of tea and snuggled with the kittens.  After a few more trips to the bathroom and cleaning of “the” bucket, he went to his room and lay on his bed. He asked to watch Youtube videos on the tablet and to hold my hand. That’s all. Those were his only needs just then. To watch other people play videogames and to be near me.

Do I care about that marathon now? Nope. Not today. Will I try to run then berate myself because my body isn’t ready? Nope. Will I snuggle with my sick kiddo and just appreciate the fact that he needs me and right now nothing else matters?

I have some degenerative disc action–fairly  normal in a lot of folks.  I also have a herniated disc between L3 & L4 that seems to be pinching or pressing on a nerve, causing weakness in my leg–not so normal. 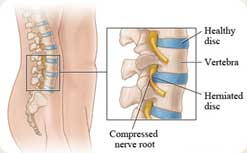 I met my physical therapist yesterday. He was helpful, knowledgeable and very optimistic that he could get me running again.  He (and my doctor) are concerned that my left leg has considerable weakness.  My muscles and reflexes seem to be a little better, not as bad as a few weeks ago.  But when I explained how tired my leg gets with just walking, he had me try to “heel walk.”  It is completely impossible for me to do that right now.   Have you ever experienced something like that before?  It’s not that it’s painful to try to rock back on my heels, but it is impossible. My leg just can’t do it.  I guess it would be like trying to lift 500 pounds.  Your body just doesn’t have the strength to do it.  That’s what my leg feels like.   Weak. Exhausted. Useless.

When I talked with my doctor this evening, she recommended I see a neurosurgeon.  She emphasized that this doesn’t mean I need surgery now or if ever, but it would be best if someone who specializes in this can tell me exactly what’s going on and what we can do about it.  I did tell her that I liked my physical therapist and his positive outlook was encouraging.  She was pleased with this, but I’m not sure she has a whole lot of faith in it.   After reading up on all of this, I think I see why.  (Sometimes the Internet is a very dangerous thing.)  Many sites I visited said that very often the pain from herniated discs can improve in 6 weeks to 6 months, through physical therapy, medication, compresses, etc.  BUT, weakness in any limb is a little scarier.  A few sites mentioned that those people that suffered weakness in their legs were more likely to need surgery–although sometimes that caused permanent weakness.

So what does all of this mean?  I still have no idea.  I’ve done a few google searches and I can see runners out there that have or have had herniated discs.  At first all I saw were posts about how walking and swimming were the best exercises to do and would be the only ones I would ever do….I nearly cried when I read that.  Thankfully, though, I saw other posts and sites that gave me hope that this wasn’t over.  Hope that my body could recover and be somewhat like it was before.

And right now, that’s about all I can do is hope.  I can hope, do my physical therapy exercises, and get back on that damn elliptical machine.  My very old and cheap elliptical is about the only thing maintaining my semblance of sanity.  So for now, each morning I will get dressed, lace up my running shoes, put my headphones on….and head downstairs to my basement where the elliptical awaits.   This is nothing at all like the rush of the cool Maine air whipping at my clothes while my feet pound the pavement.

At least for now.