This week I have not done a very good job at being a parent. In fact, I’ve sucked.

I made some pretty stupid decisions, like taking home a lobster from a library program my child attended…where the kids named the lobster Steve…and then my husband and I cooked the lobster.  My son yelled, “You can’t eat my friend!” After trying to explain that in our home, lobster is our food not our pet, he refused to talk to us. He didn’t talk again until we were eating the lobster…and then he just cried silently for several minutes. (As a side note, the boy actually likes eating lobster, but apparently not after it has a name or after he got to watch it poop on a table in the library. True story.)

A few nights later, my boy was reading Calvin and Hobbes at bedtime when he called out to me, “Mom, do YOU put all the presents under the Christmas tree?”

I started to give him only the partial truth, but when he called me on it, I fessed up. He responded with a gasp then, “NO! Wait! I’m too young!” You can imagine the rest of the conversation. It was filled with lots of crying, honest talk, and ended with my attempt to tuck him in which he adamantly refused.

Last night I let the boy buy a slushee. A small one. I didn’t think it looked like a small, but he was sure it was. So I gave him the benefit of the doubt and later found out it was  large. He slurped that drink down as quick as he could, then proceeded to talk like the guy on those drug commercials telling you all the side effects of that medicine your doctor wants you to take. And did I  mention that I let him drink this AT NIGHT! *forehead smack*

I yelled at him last night, too, when he was “tic-ing.” The tic is a new one, like a nervous smile, and always seems to happen at the worst possible moment. I felt like a total schmuck afterwards.

The week was also filled with babysitting woes and juggling schedules that will probably continue for the rest of the summer, which just makes me want to wish away the summer. And I *hate* that feeling.

It was such a friggin’ long winter and I have waited and longed for these lovely two and half months to arrive. Now that summer here, I’m really trying to enjoy it. The weather hasn’t been too hot or humid, a bit of a rainy stretch, but nothing horrendous. I’ve loved it and have dragged my child outside to “enjoy” the weather with me as often as I can.  Although when you work full-time, that “often as I can” really means “hardly ever.”

You know, I get to work at a job and career that I love. In fact, I’m about to attend a week-long leadership training seminar as a mentor, something I’ve wanted to do for a while, and yet I feel like a damn hypocrite. If my financial situation changed and I was able to stay at home more with my son? I’m quite certain I’d give my notice, sign-off of all of the committees I’m on, and run home to my boy as fast as I could go.

The kid is 8 years old. He can be a royal pain in the ass (and has been consistently for the past month) and yet I still want to be with him. (I know, right? Bizarro.) I’ve been trying to take advantage of those hours when I’m not at work and we can read together, play basketball, hike with friends or by ourselves, play card games, or just talk about anything and everything, even about why boys and men seem to fart so much. (Seriously, why is that?)

I’m running out of time I can be with my son when we *both* want to be with each other.

I keep coming back to this dilemma over and over and over with no good solution. Do I just suck it up, do the best that I can, and repeatedly apologize to the kid for not spending as much time with him as we want? How do I make us all happy? Or is that even possible? I know that if I’m not happy, I will be an even worse mother AND wife, and then *everyone* (and I mean everyone who has the slightest contact with me) will be miserable.

How do YOU do it?

I keep saying to myself that we’re ok. After all, I didn’t do everything wrong this week. I fed my kid healthy snacks as we went on a hike with friends. I played basketball with him many times and never let him win. (He kicked my butt at least every other game.)  I tried to explain why apologizing when you’ve done something wrong is the right thing to do, even if it’s difficult. And we started reading the new Jedi Academy book together and have discussed how cool it would be to go to school there. I suppose we’re as happy as we can be right now.

But is it enough? 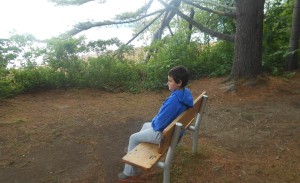