Since I was 7 years old, I have turned to food to ease my anxiety, to diffuse my anger, to make me feel good…or at least better. I have eaten away every emotion until only what appeared to be happiness remained. Looking at it now, I’m sure it was the sugar and fat that gave me that euphoric feeling.  And yet knowing this, and after losing over 80 pounds to finally get out of the fat lady’s clothing store, I *still* turn to food when the going gets tough even though I promised myself I wouldn’t ever again.

These past few weeks have been extraordinarily stressful. It’s not the best excuse, but there it is. Fortunately, my food choices have at least changed since my big girl days. I used to eat lots of chips or ice cream or leftover Chinese takeout as my binge foods of choice. Now, when I’m feeling blue or need to take the edge off, I eat rice mixed with canned peas and shredded cheese and a teaspoon of butter or a big bowl of Cinnamon Rice Chex with almond milk. 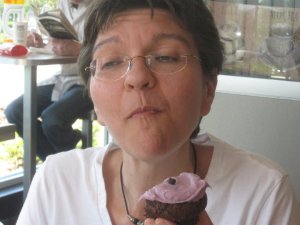 Me, 4 years ago, eating a scrumptious gluten-free cupcake from Babycakes in Orlando.

It may not seem like a big deal and honestly, in the big scheme of things it’s not. Since I lost this weight, I’ve been obsessed about keeping it off. I still intend to keep it off and I’m sure I’ll keep counting those calories and running when I’m able, but I also realized this week that I have to start making some kind of effort to let this go. It won’t be easy, and it won’t be overnight that’s for damn sure, but I have to find a way to make myself a little happier and a lot less stressed. That may mean I’ll skip a morning workout and read instead or maybe have a snack between breakfast and lunch so I don’t maim any of my co-workers.

Does this mean I might gain a pound or two? Maybe. Will I freak out if I do? Of course I will. I’m not naïve enough to think that just by saying, “Hey, I won’t get stressed by that little bit of weight gain!” that I *won’t* get stressed. I most certainly will because that’s who I am. What I’m shooting for, is to not get AS freaked as my normal. To try to take it a bit in stride and realize that it’s not the end of the world.

This past week I thought a big chunk of my world really was about to end, and gaining a pound or two doesn’t feel like that at all. Gaining a bit of weight can be resolved at some point by eating less and exercising more and going to bed hungry more often than not. It’s a serious pain in the ass, but it’s not the apocalypse.

One thought on “The Comforts of Food”