I’ve had the great fortune to have some really happy days lately. My last post was about a particularly good run I had. This past week I had a wonderful 47th birthday with my family (physically distancing) and yesterday I had just an incredible day with my son, exploring Fort Knox (this is in Maine, not the one filled with gold in Kentucky) and eating good food and having thought-provoking conversations.

But when I got up today, I could feel grief weighing me down immediately, like it was sitting on my shoulders. Today is my brother’s birthday. Phil should be turning 52 today, not remaining 49.

As I trudged to the kitchen and made my coffee, I glanced at my phone sitting on the counter. “Do I really even want to look at this today?” But I did. The first thing I saw was a Facebook post I created the year before my brother died, wishing him a happy birthday and telling the world how amazing I thought he was and how proud I was to have him as my brother. Then I saw a post my sister wrote today on Phil’s FB wall, telling him how much she misses him and although she’s glad he’s not having to experience the pandemic, wishes he was here for everything else.

I drank my coffee, swallowed any tears that were trying to form, talked with my husband and got dressed to go for a short run. As I laced up my sneakers, I couldn’t hold it in any longer. I could feel the sobs all the way in my belly and working their way up. My husband came out to see why the hell was I going to run outside in the heat, but when he saw my face he just came to me and held me and I let it out. But it seemed that once I started, I just couldn’t stop. I finally let my husband go and I was able to say or rather hiccup, that I just had to get outside. It was just a 2 mile run and although it would be bad, I just needed to leave the house. I couldn’t breathe and felt trapped and needed to be someplace with no walls.

So for 2.12 miles, I stopped thinking or feeling. I listened to my music and just focused on my task. It was certainly brutal (so much respect for you southeastern U.S. runners!), but it took me out of my brain for a little bit.

Once I showered and stretched, I watched a virtual Drag Queen Story Hour that made me happy for a bit, but then I just sat at my desk, put my head down, and cried some more.

Grief is not just sadness. It’s heavier than that. It affects my physical body, my mind, my heart, my appetite, my world. After almost 3 years since my brother has died, I can say that I do have good days now. With Mom and Dad both dying last year, the number of really good days in the past year I can count on one hand. But the fact I can count any is an incredible thing and gives me hope that I will have many more. But when days like these hit, when you just want to curl into yourself and cry and shut everyone else out, they still hit really hard. I still don’t know whether to embrace them or fend them off, so I do a little of both.

I’m letting the tears come today but also hiding a little bit from my son. We’re still spending some time together and working on a Father’s Day ice cream cake for my husband, but I’m going into my office more or on our porch and just sitting and remembering. We’ll toast Phil this evening like we always do, and we’ll remember him together. But right now I just want to be by myself and re-watch the video of Phil reading to little Briar and hearing Phil laugh and joke. I just want to wallow in my grief and in how much I miss him today.

Sometimes I really hate Facebook. Or maybe I just hate some of the people that use it.

Today is my brother’s birthday. He should be 51 today, yet he will forevermore be 49. An age that many like to say they’re at when they’re really older. But no one, including my dear brother, wants to stay at 49 for an eternity.

Last year on this day, I did ok. Until my sister called me then I cried…a lot. But I was ok. Today? I just wasn’t. I felt uneasy as soon as I woke up, although I thought it was from the argument my son and I had the day before. My parenting skills were not at their best yesterday and I said things I shouldn’t have. I did apologize to my boy, though, and we made up before bed last night. But I thought this morning’s uneasiness was due to a guilt hangover. But then, like a lightbulb exploding, I remembered. It’s June 20th. Six days after my birthday. Phil’s birthday.

I knew it was coming. Of course I did! It’s just after my own birthday, typically just after Father’s Day. But for a few minutes it was not part of my conscious thoughts. And then it was. And the grief started to settle into the back of my eyes, my downturned mouth, even into my bones. Once I got to work, I sat at my desk in my empty building and sobbed. I tossed my glasses, covered my face with my hands and let it go.

And yet I couldn’t let it go. I could feel that sadness and grief cling to me all day. I thought I would go home early in the afternoon, but I stuck it out for most of the day. But foolishly, oh so so foolishly, I looked at Phil’s Facebook wall. I knew some of my family might post something, and I get that. I do. I sometimes write on his wall, too, or talk to him in my car or in my head. But today I just couldn’t write anything. I just read the few comments. And I started to get so damn angry.

One person just wrote “happy birthday.” So, does this guy know that my brother is gone? Maybe he doesn’t. So shouldn’t I tell him? Shouldn’t the entire world know that this amazing, hilarious, sweet man is no longer on this godforsaken planet and it will never again be as good as a place as it was? But what about the woman, who I KNOW knows about my brother’s death, and her fucking cheery message? “Happy birthday, Phil!” with stupid ass balloons in the background. WTF? Seriously! What is this?!? He’s not here! He can’t celebrate ever again! Why did you write this?!? WHY?!?

I know I need to ask myself, “why do you care, Holly, and why are you so friggin’ mad?” These are the exact questions Phil would ask me. I know he would. Especially the part about caring. He was pretty good about trying to distance himself from things and people that really didn’t matter. No sense getting worked up over people that don’t care about you nor do you care about them. Just let it go.

But sometimes….sometimes it feels good to be angry and hate someone for something as silly as a FB post, because there isn’t anyone to be angry at about losing my brother. There’s no one I can yell at for taking away the person whom I looked forward to talking to, the person my son confided in and needs so much right now, the person that made me laugh like no other. So instead, I rage to myself (and to you) about a stupid meaningless post, until my anger burns out and I cry once more.

If I had some wine (I cannot believe I don’t have any right now), I would toast my lovely, hilarious, snarky yet kind big brother.

I miss you, jackass. I can’t quite move forward (there will never be moving on). I’m mostly standing still, occasionally going backwards, but I’m trying to put one foot in front of the other. I’m trying. ❤

Tomorrow is my birthday. My first without my brother. One week from today should have been his 50th. This weekend we would have had a family party to celebrate our birthdays along with our dad’s birthday and Father’s Day, just like we’ve done for over 10 years. Phil and I have been celebrating our birthdays together for most of our lives. That’s what siblings do when their birthdays are 6 days apart.

So this year? No family party. I have no desire to celebrate and neither does my family. We’ll get together later in the month so we can hang and eat and play games outside. We’ll celebrate summer but not birthdays.

Typically, I’m pretty excited about my birthday and I think I’m still a little excited this year. I like gifts, good food and kind words. But I’m thinking more about Phil’s birthday this year. I want to celebrate him somehow that day. I know I’ll be thinking of him, probably post about him, but what else? If he was here, I’m sure I would give him black balloons or something with the grim reaper and bring him sushi or something else he loved to eat. But….what do I do now? Maybe buy his book that I haven’t purchased yet? Read something he would have, eat foods he liked?

Maybe just talk about him. Cry. A lot. Maybe try talking *to* him again? I did that the first week after he died. I didn’t know how to live without talking to Phil nearly every day, so when I was in the car or went for walks, I’d start talking to him. But I stopped. I think I was angry, still am. Angry at the world, at fate, at Phil’s stupid fucking heart. But I miss him so damn much. Still. I miss talking to him about books and movies and my kid. I miss his laugh, his view on the world, his very loud opinions about people and their stupidity. You know, with all the drama that surrounded my mom and her situation these past few months, my sister and I both often think, “Phil, you asshole, we can’t believe you missed out on all this shit!” I can still hear that mischievous laugh he had when he knew he got away with something. It was priceless.

I guess I’m celebrating Phil right now. That is if you can “celebrate” someone with tears staining your face and snot threatening to stain your shirt. And I guess if you’re reading this, then maybe you’re celebrating my big brother, too. 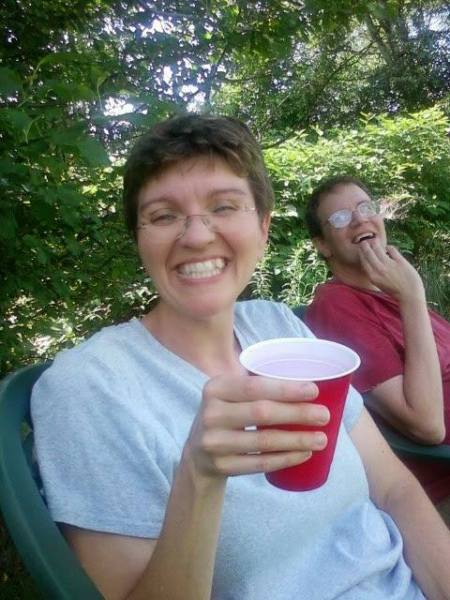 If you have a glass of dry red wine or Coke Zero or even a joint, then raise it to that handsome guy you see in the background there.

The world misses you, Phil. It will never be the same without you. You were one of the greatest. ❤